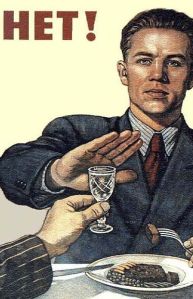 Alcohol has been a huge influence on Russia’s culture, whether it be a good or bad one. In 1979, the state derived approximately 25.4 billion rubles in indirect taxes from the sale of alcoholic beverage which was more than what was paid in income tax. However, alcoholism was on the rise in the Soviet Union and it lead to an increase in suicides, divorces, child-abuse, absenteeism, and accidents on the job.

After two months of being General Secretary of the Communist Party, Mikhail Gorbachev led an anti-alcohol campaign in May of 1985. The first laws restricting access to alcohol came into effect on 1 June 1985. These laws would prohibit alcohol at all workplaces, prohibit the sale of alcohol at bars, banned sales before 2 p.m., restricting alcohol sales to off-licenses, banning sales on trains, and similar establishments. Gorbachev would also close vodka distilleries and destroyed vineyards in Moldavia, Armenia, and Georgia in order o cease the production of wine. In August 1985 prices of alcohol increased by 25%, and would increase again in August 1986.

The anti-alcohol campaign did achieve its goal of reducing alcohol consumption in the Soviet Union, but it also created organized crime. During an interview the Minister of Internal Affairs admitted that drinking related crimes, home brewing, and alcohol theft were on the rise. In two years, more than 1 million stills have been confiscated, and more than 4 million liters of home brew were destroyed. There was huge surge in the theft of alcohol in 1987 with there being over 7,000 crimes.

Gorbachev’s campaign would fail rather rapidly. Not only did organize crime become an issue in the Soviet society, his government had declining revenue due to the sharp contraction in excise taxes because of the campaign (Freeze, 255). In 1987, Gorbachev had to abandon his campaign and deal with its consequences for the remainder of time he was in office.

View all posts by pgiovannini